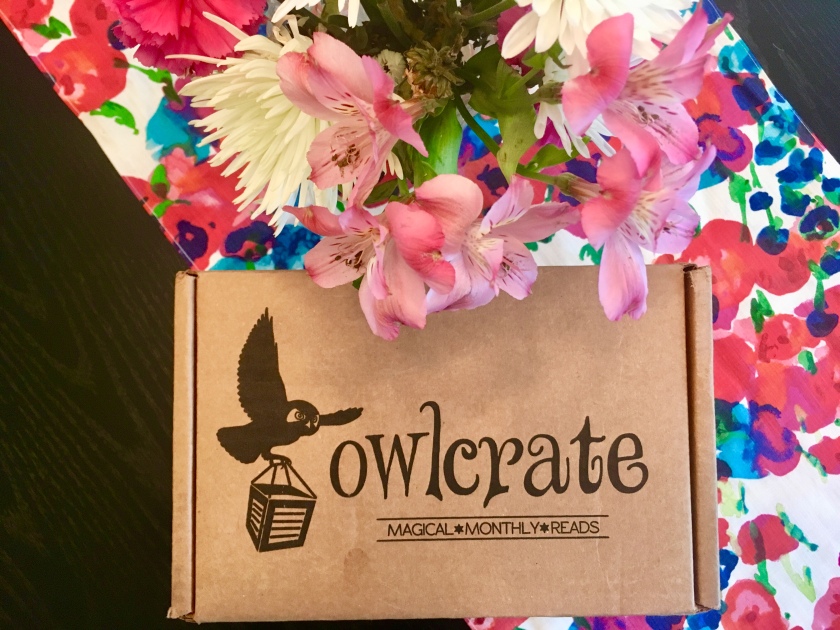 Over the past year or so, I have discovered the absolute joy that is book subscription boxes. I have been an avid OwlCrate fan for a while now, and I decided to try out a lot of different book subscription services this year, and to review each of them. You can check out my post on last month’s OwlCrate here. During the month of March, I decided to add the LitJoy Crate, in addition to my usual OwlCrate. I loved them both, and figured that I would do one giant unboxing post for them both!

March OwlCrate: Across the Galaxy

As a general rule, I’m not a huge fan of books set in space. So, I was a bit dubious when I heard that the theme for this month was Across the Galaxy. Thanks to my husband, I’m starting to come around to movies and tv shows set in space, so I figured maybe I could enjoy a book set in space now that I am more acclimated to that setting.

The next item in the box was an exclusive candle based on The Illuminae Files series from Wick & Fable. There were two different scents, and I got the Kady Grant scent, which smells like oranges and has pretty sparkles on top. I’ve not read this series, but I really loved the scent of this candle! 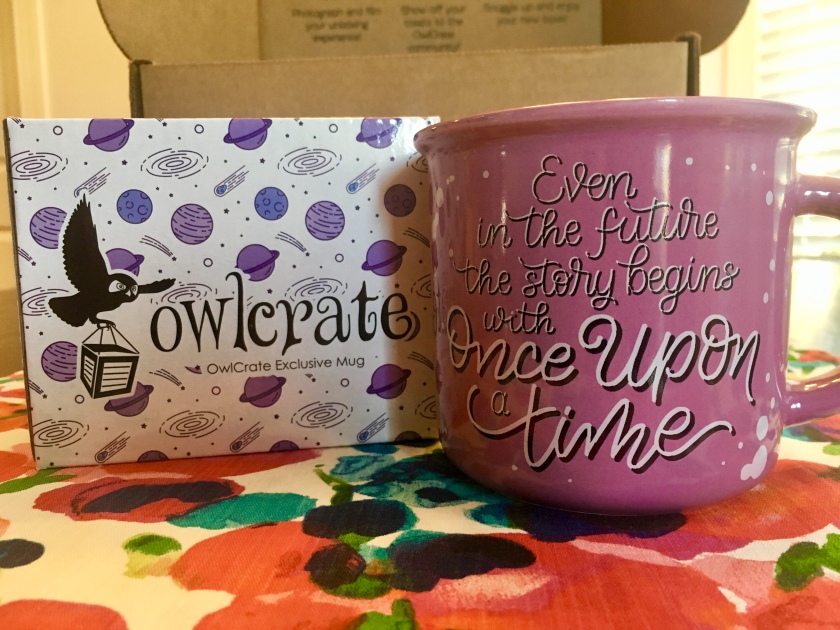 I am all about getting new, bookish mugs! This one is inspired by The Lunar Chronicles, and was designed by artist Sasha Natasha. This is another series I have not yet read, but it’s been on my list for quite some time. And you know how I feel about the color purple 😉 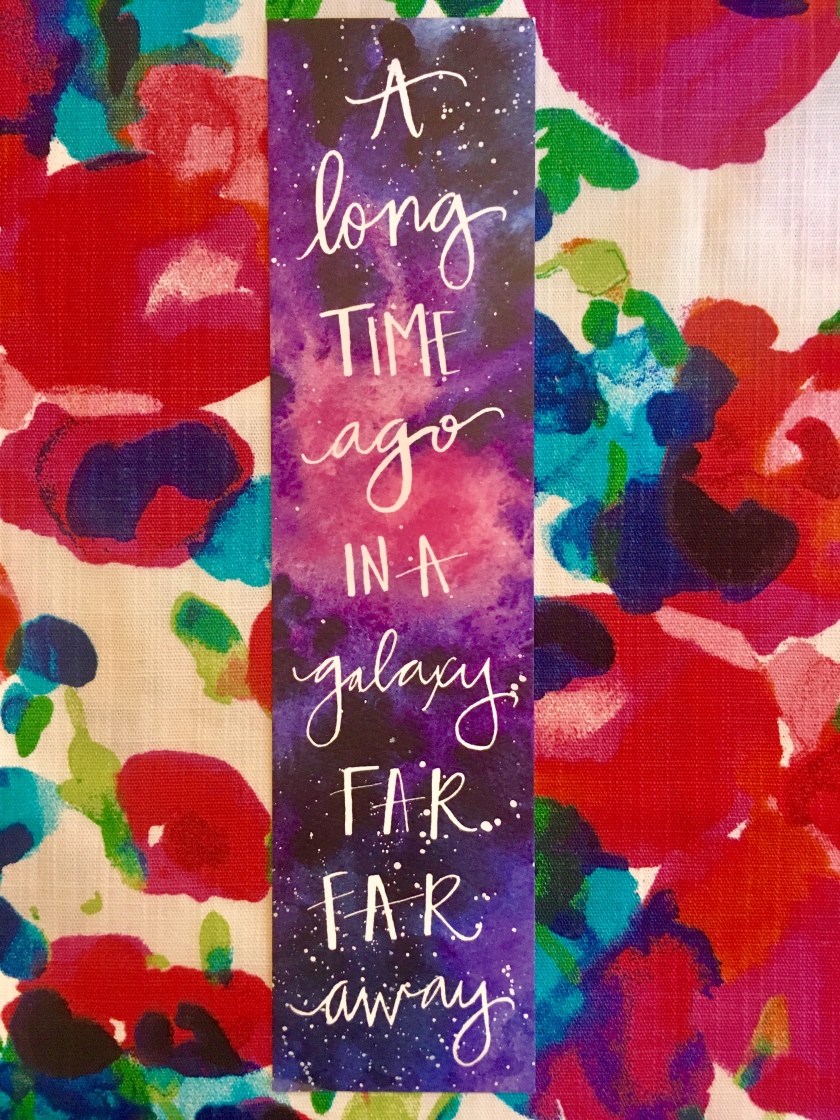 I am always in need of more bookmarks, and this one is absolutely gorgeous!! This hand-painted watercolor exclusive bookmark was designed by Lexy Olivia. Again with that purple though 😀

I am always excited when there are wearable items in a subscription box, and this is awesome! This infinity scarf is incredibly soft, and a beautiful color and print. This one is made exclusively by OwlCrate, and it will definitely be around my neck for the foreseeable future! 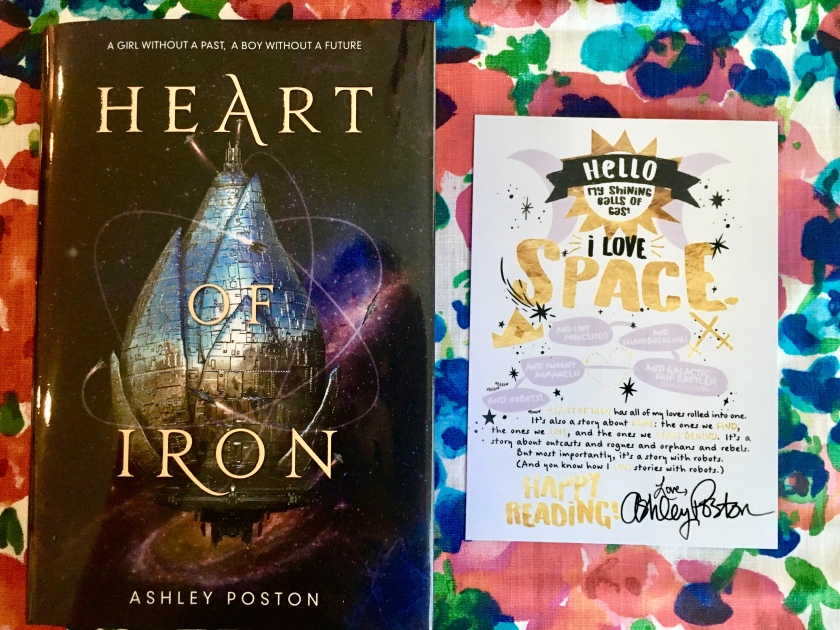 Now for the book of the month, Heart of Iron by Ashley Poston! Here is the Goodreads Synopsis:

Seventeen-year-old Ana is a scoundrel by nurture and an outlaw by nature. Found as a child drifting through space with a sentient android called D09, Ana was saved by a fearsome space captain and the grizzled crew she now calls family. But D09—one of the last remaining illegal Metals—has been glitching, and Ana will stop at nothing to find a way to fix him.

Ana’s desperate effort to save D09 leads her on a quest to steal the coordinates to a lost ship that could offer all the answers. But at the last moment, a spoiled Ironblood boy beats Ana to her prize. He has his own reasons for taking the coordinates, and he doesn’t care what he’ll sacrifice to keep them.

When everything goes wrong, she and the Ironblood end up as fugitives on the run. Now their entire kingdom is after them—and the coordinates—and not everyone wants them captured alive.

What they find in a lost corner of the universe will change all their lives—and unearth dangerous secrets. But when a darkness from Ana’s past returns, she must face an impossible choice: does she protect a kingdom that wants her dead or save the Metal boy she loves?

I actually think this sounds great! I’m excited to read it. This will certainly be outside of my comfort zone, which is always exciting and nerve-wracking. The book was signed by the author (who has an awesome signature, by the way!), and the pages were stained purple, which just makes me love it even more! There was also a poster included that features several characters from the book. 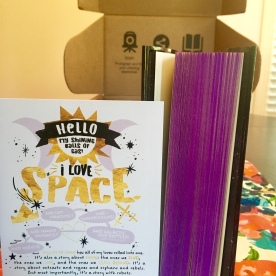 Overall, I thought the March OwlCrate box was great! And it was very purple, which always makes me happy 🙂

I saw the theme for this box advertised a lot over on Instagram, and I was intrigued, so I decided this would be my new subscription box for the month! I have heard good things about LitJoy Crate, so I had fairly high expectations.

The first thing I pulled out of the box was this absolutely precious vinyl Ariel sticker! It is so cute! This was designed by Melisa of NerdyGrlDesigns. I don’t know where I’m going to stick her yet, but she will be glorious wherever she ends up 😉

This keychain is the softest thing I think I have ever felt in my life! I couldn’t stop rubbing it on my face haha  It is termed a Faux Fur Heart-of-the-Sea Keychain. It appears to be an exclusive to LitJoy Crate.

Again, with the wearable items! These compass earrings are so cute! I have worn them several times already, and they appear to be really good quality as they didn’t turn my ears green. I think these must be LitJoy Crate exclusives as well.

These items from Swoon READS are so cute! I already put the button on one of my book totes, and the bookmark will certainly be put to good use soon! 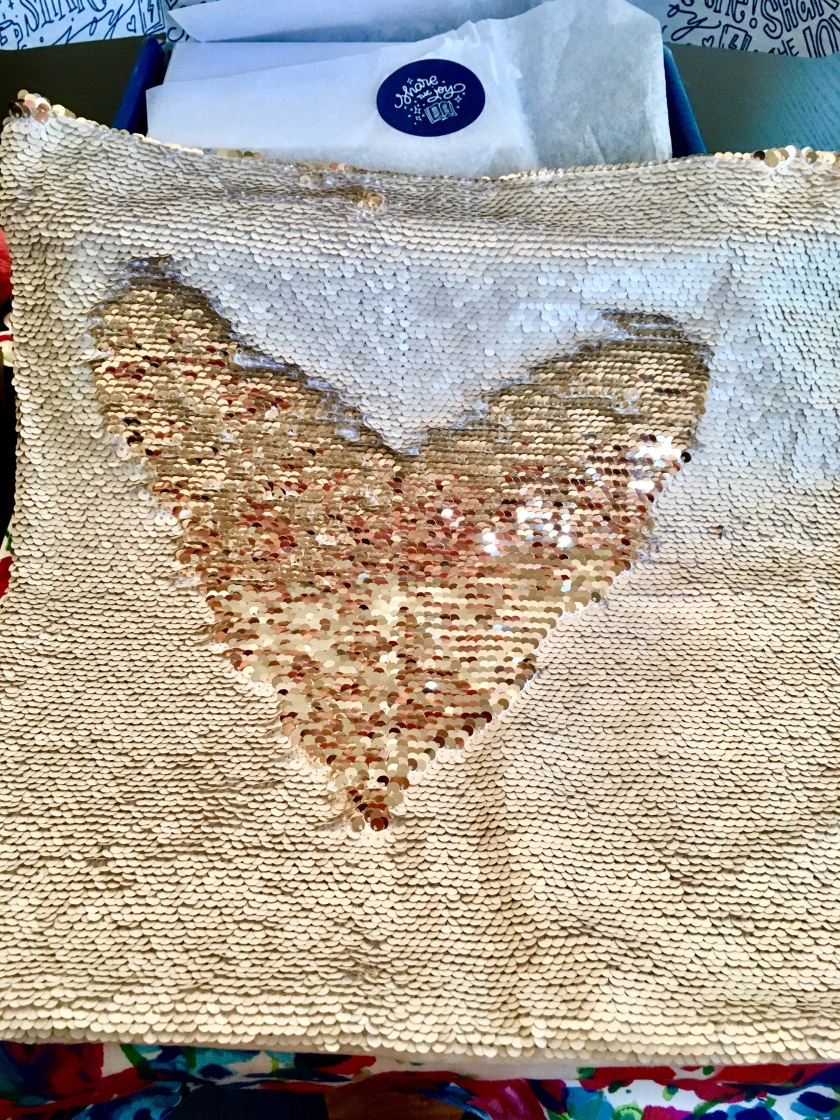 This pillow case is the coolest thing I think I have ever received in a subscription box! This is another LitJoy Crate exclusive, and it is meant to mimic a mermaid’s scales. It is awesome, and I cannot wait to display it in my office! 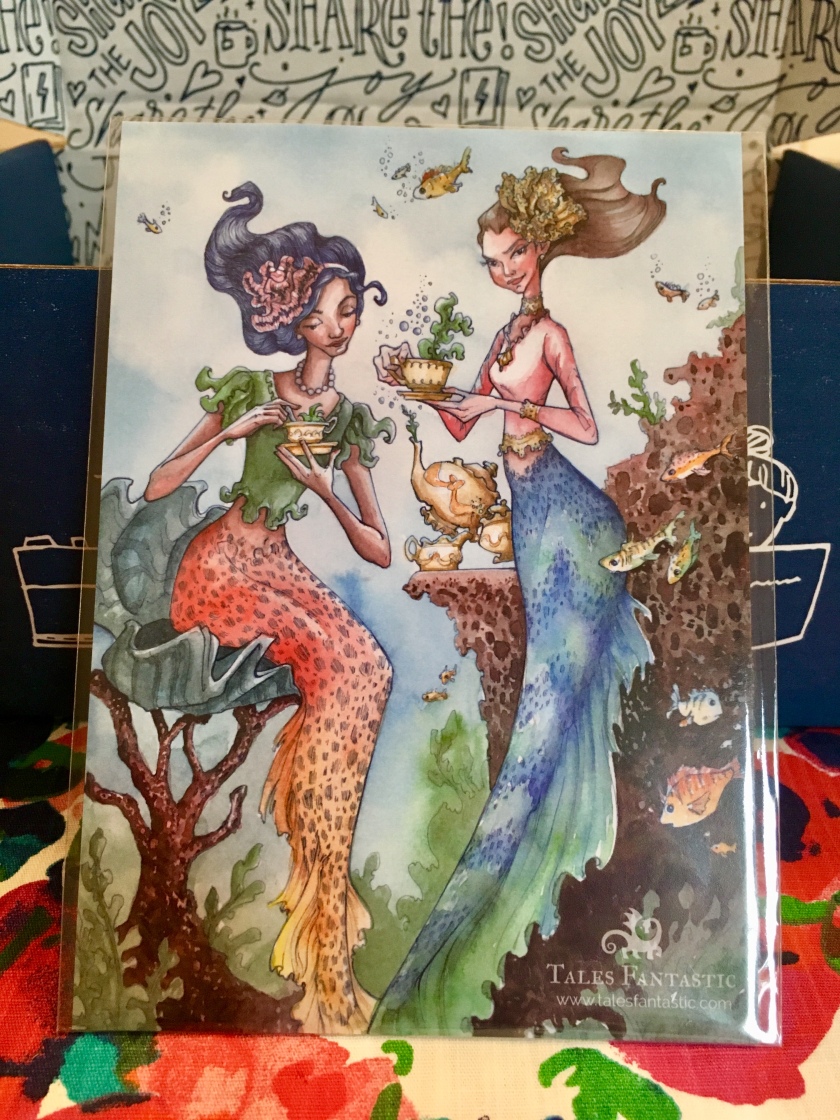 This beautiful mermaid print is from artist Manelle Oliphant of Tales Fantastic. It has already gone on display in my office! Beautiful!

These seashell lights are so much fun! They are currently adorning the bookcase in my office and bring a lovely warmth to that corner 🙂

I was so excited when I pulled this book out of the box! I have had To Kill A Kingdom on my Want To Read list for a while! It came with a signed bookplate and a letter from the author, Alexandra Christo. Here is the Goodreads Synopsis:

Princess Lira is siren royalty and the most lethal of them all. With the hearts of seventeen princes in her collection, she is revered across the sea. Until a twist of fate forces her to kill one of her own. To punish her daughter, the Sea Queen transforms Lira into the one thing they loathe most—a human. Robbed of her song, Lira has until the winter solstice to deliver Prince Elian’s heart to the Sea Queen or remain a human forever.

The ocean is the only place Prince Elian calls home, even though he is heir to the most powerful kingdom in the world. Hunting sirens is more than an unsavory hobby—it’s his calling. When he rescues a drowning woman in the ocean, she’s more than what she appears. She promises to help him find the key to destroying all of sirenkind for good—But can he trust her? And just how many deals will Elian have to barter to eliminate mankind’s greatest enemy?

You know how I feel about a good fairytale retelling! I love the idea of a dark Little Mermaid retelling, and I cannot wait to dive into this one (pun totally intended, not even a little bit sorry)

Overall, I was extremely pleased with the March LitJoy Crate! I saw what next month’s theme is going to be, so I will be continuing with this subscription for at least one more month!

How about you? Did you get the March OwlCrate or LitJoy Crate boxes? What did you think? Do you subscribe to any other book subscriptions that I should try? Let me know down in the comments!

Hello!! My name is Whitney, and I love books! I spend a huge amount of time reading (way more time than I should, if we are being perfectly honest!) I am currently working as a library page at a branch of my local public library. I live in Texas with my husband, daughter, and my dogs, who are a total mess and generally are my reading buddies. I also love to sing, hike, play The Sims, watch tons of YouTube videos, and drink creamy tea and coffee. View All Posts

Hello!! My name is Whitney, and I love books! I spend a huge amount of time reading (way more time than I should, if we are being perfectly honest!) I am currently working as a library page at a branch of my local public library. I live in Texas with my husband, daughter, and my dogs, who are a total mess and generally are my reading buddies. I also love to sing, hike, play The Sims, watch tons of YouTube videos, and drink creamy tea and coffee.